Dr Mike Todorovic on The Genetics of Strength

The Genetics of Strength

Personifying a millennium of Nordic tradition, Thor Bjornsson takes his fifth and final step before unceremoniously dropping the 30-foot log that added 650kg to his already titan frame. This feat of strength broke a 1,000 year-old Viking record and symbolised the unbroken line of strength that seems to be synonymous with the Nordic people.

“Viking power!” and variations of this sentiment is echoed in the comments section of the YouTube video and got me thinking about the following questions:

Firstly, considering we are talking about genetics we should walk through the basics.

Within each cell of your body (except red blood cells) you contain a genetic instruction booklet, comprised of DNA, called the genome. Your genome is a 3 billion letter booklet, written with only four letters of the alphabet; A, G, C, and T. If I were to compare the position of each of the 3 billion letters of my genome with your genome, the position of each A, G, C, and T will match 99.9% of the time. This means 0.1% of us is genetically different, accounting for around about 3 million letters (or one difference every thousand letters). It’s these differences, called Single Nucleotide Polymorphisms or  SNPs (pronounced snips) that make you look like you and me look like me (i.e. brown hair, blue eyes, tall, etc.). It is also these SNPs that are used to determine ancestry and other traits in commercial genetic tests like 23andMe. People tend to fork out loads of cash for these DNA kits to tell them whether they are from some obscure village in Hungary, the peaty marshes of Scotland or, as we are exploring in this article, the Nordic shores of Viking ancestry. This brings us to our first question:

DO THE ANCESTORS OF VIKINGS POSSESS A GENETIC GIFT THAT IS UNATTAINABLE FOR THE REST OF US?


Well, cancel your 23andMe order because I am about to save you some money. If you have European ancestry, then you are indeed a Viking. But you are also Scottish. And Hungarian. German. Italian. And pretty much everything else.

How do I know this? It’s statistics!

You have two parents. Each of your two parents have two parents. And each of their parents have two parents and so on. As we regress through each generation the amount of people, we depend upon to procreate for our existence doubles. Go back 10 generations and you have over 1,000 direct relatives. Go back 30 generations and over 1 billion people are responsible for you today. Go back 1,000 years and the amount of people required for your existence is over 1 trillion. This is a lot of people. So many people in fact that it significantly overshadows how many people have EVER existed on the planet, alive or dead (which is about 108 billion). How can this be?

Well, from time to time (actually a lot) our family tree tends to collapse upon itself and certain people re-appear (e.g. a distant cousin may marry back into the family folding our lineage back in upon itself). Because of this coalescence, if you go back 1,000 years you’ll find that everyone alive in Europe – who left descendants – are related to all Europeans alive today! As geneticist Dr Adam Rutherford explains, this means that it is almost certain you are related to King Edward III, Emperor Charlemagne, and William the Conqueror. It also means that you are indeed a Viking! In fact, anyone alive today only needs to travel back 3,400 years before they are related to anyone (and everyone) that existed on the planet at that time!! What’s my point? Considering the vast dispersion of genetic material around the globe, there is no genetic gift that is locked away in “Viking” ancestry that hasn’t had the chance to promulgate outside of Scandinavia and into your genome. So, the answer to the question is no.

But strongmen and strongwomen are tall and wide and obviously strong! “This must be genetics!” I hear you say. This brings us to the next question:

WHAT IS THE ROLE OF GENETICS WHEN TALKING ABOUT ATHLETIC PERFORMANCE (I.E. STRENGTH)?

It is not uncommon to read a news headline that states something along the lines of “Strength gene identified” or more inquisitively “Do YOU have the strength gene”? Let’s be clear. There is no “strength” gene or “height” gene or “eye colour” gene. While it is true that your genes do indeed influence height, bone density, muscle development and many other traits, it isn’t the whole story. Everyone has the same genes. Actually, everyone has two copies of the same gene (one from mum and one from dad). These genes are read by machinery in the cell and are turned into proteins (which basically do everything in the body). What is important here are the SNPs. Remember those discrete letter differences dispersed throughout our genes and gifted to us from our parents? It is these SNPs that can affect the way our genes are read and ultimately influence certain traits. That being said, what do we know about SNPs and strength? Well, one study took 223,315 individuals and found at least 64 different areas of our genome (SNPs) that were associated with grip strength. Yes. 64 discrete areas of our genome influence only one specific aspect of strength – grip! There are actually many studies like this that look at very specific aspects of strength, such as isotonic strength, isometric strength, jumping ability, and miscellaneous power measurements. How are we supposed to interpret all this data? Lucky for us, researchers from Japan did this. They took the data from all these studies and analysed them together, in what is known as a meta-analysis, with the aim of determining the role of nature (i.e. heritability) compared to nurture (i.e. environment) when it comes to strength?

I like to think of this as though you have been gifted an F1 McLaren. It’s a good start, but it doesn’t make you a Monaco Grand Prix Champion.

ARE OUR GENES AN INDELIBLE MARK THAT DEFINES WHAT SPORTS WE SHOULD PLAY? OR HOW WE SHOULD TRAIN?

So, if 50% of our strength is “written” in our DNA, is it worth getting a genetic test to find out what SNPs we have? I’ll let a panel of sports performance experts and geneticists answer this one for you:

A consensus statement published by two dozen experts in the British journal of sports medicine:

“[commercial genetic tests] have no role to play in talent identification or the individualised prescription of training to maximise performance”.

Basically, if someone says they can personalise a training regime or diet for you based on a genetic test, with the express purpose of optimising athletic performance, don’t waste your money. Currently, you cannot sequence your DNA to determine what sport you would be good at. It cannot tell you whether you should eat more carbs or less fat. It cannot tell you whether you’ll be better at deadlifts, back squat, or ballet. But we are forgetting something here! Nurture! You can shape and influence your environmental factors (i.e. training protocol, nutrition, rest, mindset, etc.) to increase your genetic potential regardless of your SNPs!

As I said before, having an F1 McLaren doesn’t mean you will win the Monaco Grand Prix. Without training, optimum fuel, and a pit crew you might as well be driving your mums 2001 Honda Jazz.

Dr Mike Todorovic is a Senior Lecturer and Medical Researcher at Griffith University. He obtained his PhD in Clinical Neuroscience and currently lectures Anatomy and Physiology to aspiring health professionals. His Medical Research focuses on cell transplantation therapies and rehabilitation for people with spinal cord injury. He hosts an Apple iTunes Top 10 Science & Medicine Podcast, an educational YouTube channel on anatomy and physiology, and has a fortnightly call-back segment on ABC Radio about ‘How the Body Works’. You can find Dr Mike on social media: Instagram @drmiketodorovic Twitter @MickeyTod Facebook: Dr Mike Todorovic Strength System International Certification – what is this course about? 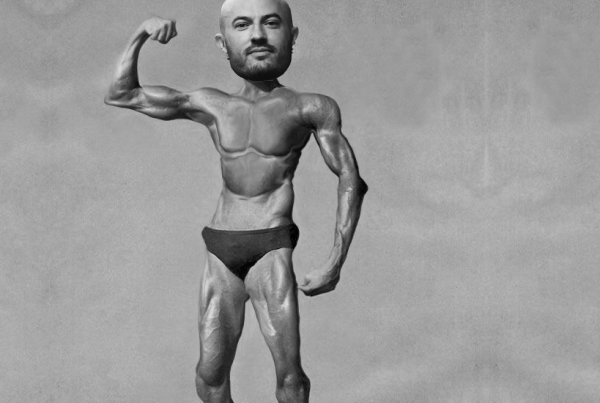 Getting Back on the Gain Train: Your Post-Pandemic Guide